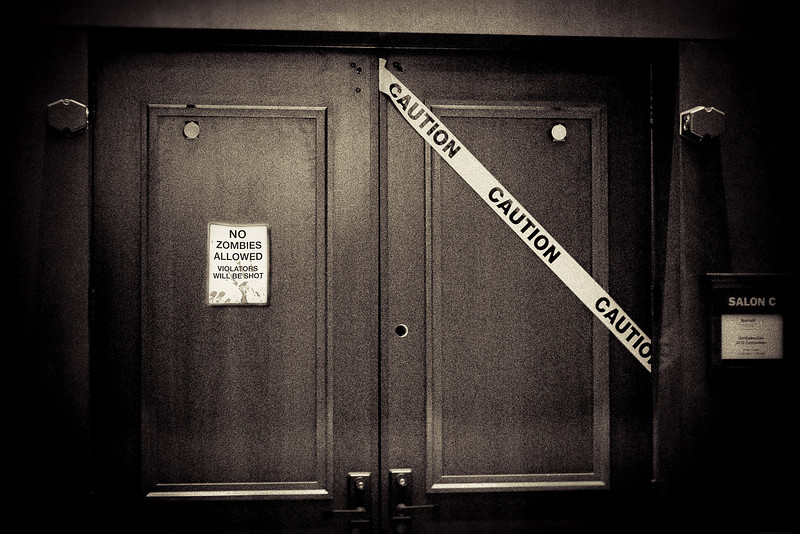 Go!Daiko-con is a smaller convention based in Michigan, but is showing steady growth. It started in 2009 as Anime Detroit, and changed to its current name in 2011.

They had a general Zombie theme throughout and so there were various decorations to that effect.

The doors for the Main Ballroom.

One of the staffers kept in character by roaming the halls and collapsing into chairs in between shifts.

Yours truly (both of us) including me having a horrible hair day. That is the last time I try switching hair dyes….

The snazzy table setup. I loved that we got nice black tablecloths – I didn’t have to put my own out!

Prepping for the Zombie shoot out.

There were a ridiculous number of Nerf guns brought by one of the staffers – and a makeshift obstacle course of cardboard. Lights got turned low and it was a free-for-all. It was a lot of fun just watching, but I heard from the players that it was AMAZING fun to participate. I did get some friendly fire on a few rounds – one nerf grenade between the eyes “HEY! Don’t take out the news reporter!” and one dart to the neck. “Helloooo?!? Who taught you people how to shoot?”

This has to be one of my top faves from the weekend – Ian Sinclair with the most serious “zombie killer” face!

One of the Resident Evil cosplayers had a riot shield – and had an ingenious plan for his hiding spot.

“Did the Apocalypse start yet?”

Shuto-con sponsored a Zombie Prom which should have been really cool but seemed to not have much in the way of advertising. Few people showed up, and fewer actually worked the theme. It was a shame as I was looking forward to a really cool photo op from this.

Stefanie did the whole zombie bride getup – I wish I had gotten a better shot of her.

I need more work on manual focusing in low light (and perhaps finally get that transmitter for focusing) as this period couple were awesome during the swing dance songs!

Much love for Marty McFly!

On to the Friday night dance . . . (I was pretty worn out and forgot my earplugs so headed home quick)

Chris Ayres getting some shots of his brother DJ’ing.

After I had danced and photographed until I could take no more, we headed for dinner and then home to snooze. Sunday (and the end of the con) was fast approaching….

On Sunday I popped into the panel with Ian Sinclair and Tia Ballard. A convention goer had brought her itty bitty adorable orange kitten in and it didn’t take long for Ian to spot it and let out a squeal. The attendee asked if he wanted to hold the kitten and he gave a resounding YES!! followed by a breathy exclamation of “best panel ever!!!”. It was just about the coolest thing to watch.

They tried to continue with the Q&A session

but it was apparent that Ian was distracted.

Finally it was time for Closing Ceremonies. Free gifts, staff awards were given, last remarks and goodbyes, and some hijinks ensued.

The guests got ahold of bubbles and Tia knew something was up when she heard Greg giggling.

Not that she’s innocent mind you.

Chris needed a shot of the crowd.

Security then came in…

and the guests had to take cover!

Greg was not worried – his Nerf-fu is strong!

Security runs out of ammo and Ian pops up for a “Is that all you’ve got?!”

Giving a zombie an award has its risks….

Shoe is up to something, that grin says it all…

And that was it!! As always, it’s a great little convention. I can see where it’s going and hope that each year brings it closer to being the next major “must-visit” anime con. I already consider it on my “must-visit” list, but certainly it takes time and numbers to compete with some of the top 10 cons and I think it can get there.

To see all the photos I took – and get share links or purchase prints – visit the gallery. 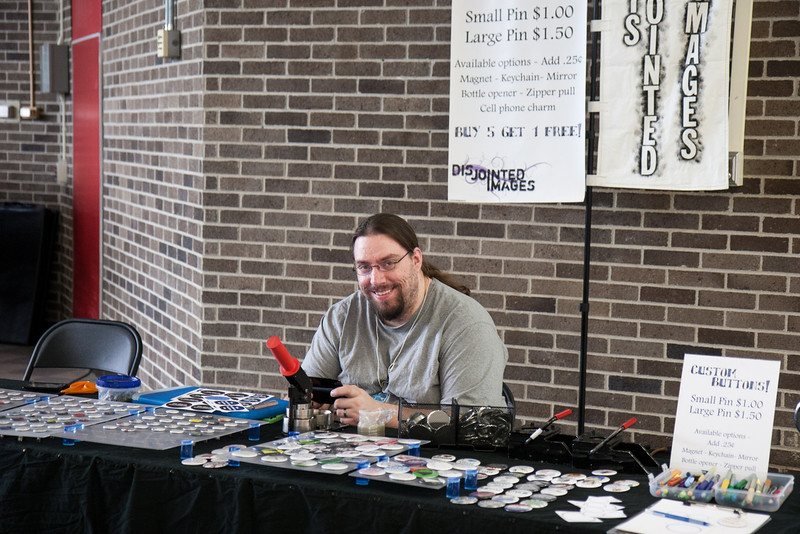