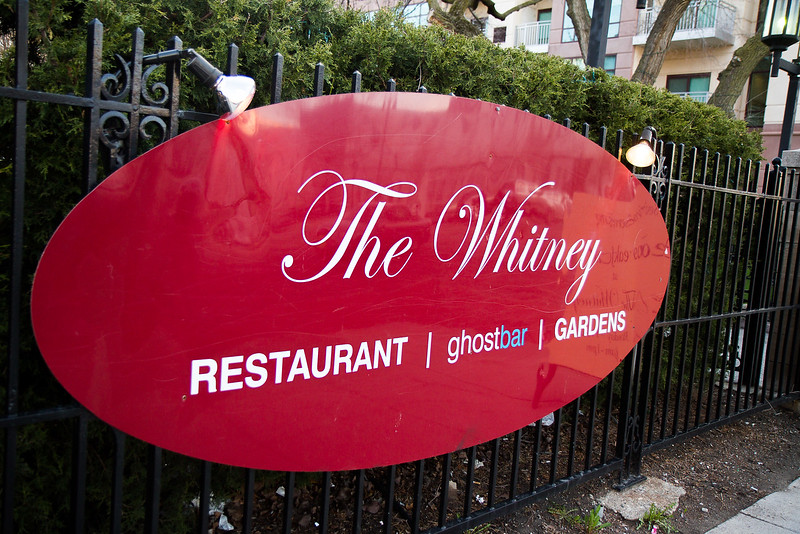 Last year I chose the Whitney as one of my DRW destinations, and enjoyed it so much that after seeing the menu this year, I decided to return. Take a moment to read over that review, and you’ll get a bit of background on the building’s history.

This year we were seated in the Music Room.

While I wasn’t able to take a full tour, I did wander the front rooms a little looking around. The staircase is striking with the stained glass spanning the landing.

Our waiter, Erik, was fantastic. My family tends to be very dry witted, and full of snappy comebacks and commentary. Erik matched us and laughed heartily at our silly comments.

When he cleared the wine glasses as we were not drinking wine, I quipped “You mean my Shirley Temple doesn’t come in that?”. He giggled and said “You know what, I will put yours in one.”

Our amuse-bouche this time was the same salmon mousse with blueberry, but on a crusty bread instead of the phyllo cups. We all had a difficult time biting into this easily, and it was less of a one bite item as well. I found the blueberries to be a bit too tart against the salmon this time too.

First course arrived shortly after. I had the Signature Eggplant Bruschetta (pictured below) and Chris ordered Shrimp Bisque, while mom got the Duet of Baby Salad and Soup du Jour. She swapped her soup option for the Shrimp Bisque for a small upcharge.

The bruchetta was good. My first bite didn’t have a good mix of ingredients and I found it a little boring. Subsequent bites were better, but I don’t know that it would be my first pick next time I visit.

The other items weren’t easy to photograph, so I don’t have a shot. The bisque Chris proclaimed perfect, mom said it was perfectly brined, maybe. It was very heavy on the salt. Chris never gets salty foods so he was happy! Mom ended up swapping back to the du jour, which was cream of broccoli, and was very pleased with that.

Main courses arrived. I ordered the Seafood au Gratin. Mom and Chris both opted for the Prime Rib of Beef.

My dish was divine. I would absolutely order this again. Au gratin’s are by default very cheesy, and it’s easy to see how some felt the flavor of the seafood can be overwhelmed. I thought the shrimp and scallops were excellent against the orzo and cheese. The cheeses were not overly sharp so as to take away from the other components. The only thing I didn’t like was the swordfish, which I had never had before. I know now I don’t like swordfish.

The Prime Rib was basically a steak. It was massive, but very nicely prepared. The whipped cream horseradish was just that, and I’ve never had something so light. It practically disappeared in your mouth leaving just flavor behind.

Finally the sweets! I had hoped to order from the standard menu, as I’ve been wanting to sample their Chocolate Ugli cake, but despite Erik’s best efforts it was not to be. They were serving only the special menu for the week and did not even have the ingredients on hand. Oh well, I suppose I shall have to make another visit (darn!).

Chris and I had the Duet of Mini Pastries and mom the White Chocolate Mousse.

The pastries were not terribly special. My plate had an eclair and a kind of cannoli. Chris had an eclair and a chocolate draped brownie/cake. The cannoli was soft, and the eclair bland (as they tend to be). The chocolate covered brownie? Ask for just two of those if you go. They were the kind of good deep chocolate flavor I wanted after my cheesy pasta.

The White Chocolate Mousse I had no intention of tasting. White chocolate does not deserve to be in the chocolate family. This however, was delicious. It was whipped and light, and was really some sort of cream pudding with a touch of sweetness. It had blackberries mixed in and strawberries on top. Mom proclaimed it the perfect light ending to a rich meal.

Upon declaring to Erik how much she loved the mixed berries in it, he laughed and said “The general manager will be thrilled, that was his idea! They were serving it with the berries on top, and he said to combine them.” My mom commented that it would not have been nearly as good separated and it was a great decision.

Now I’d be remiss in talking about our lovely server without showing you. So here is Erik. Look at that beaming face. This is a man who loves his job, and you won’t go wrong in asking for him personally the next time you’re in.

I wandered a bit more and grabbed a few snaps (without disturbing the other diners) of the front room. Erik helpfully pointed out various features and history of the things I was looking at. (Told you, the guy is just a gem).

I believe I said last year that “without a doubt we will be back.”, and it looks like I was right. You might miss out on this spring’s menu, but keep an eye on Detroit Restaurant Week and perhaps Whitney will be back on board this fall. 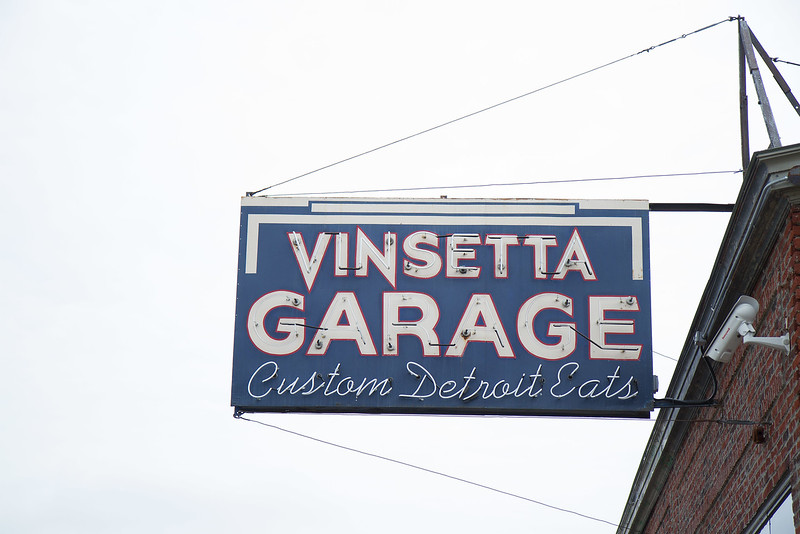 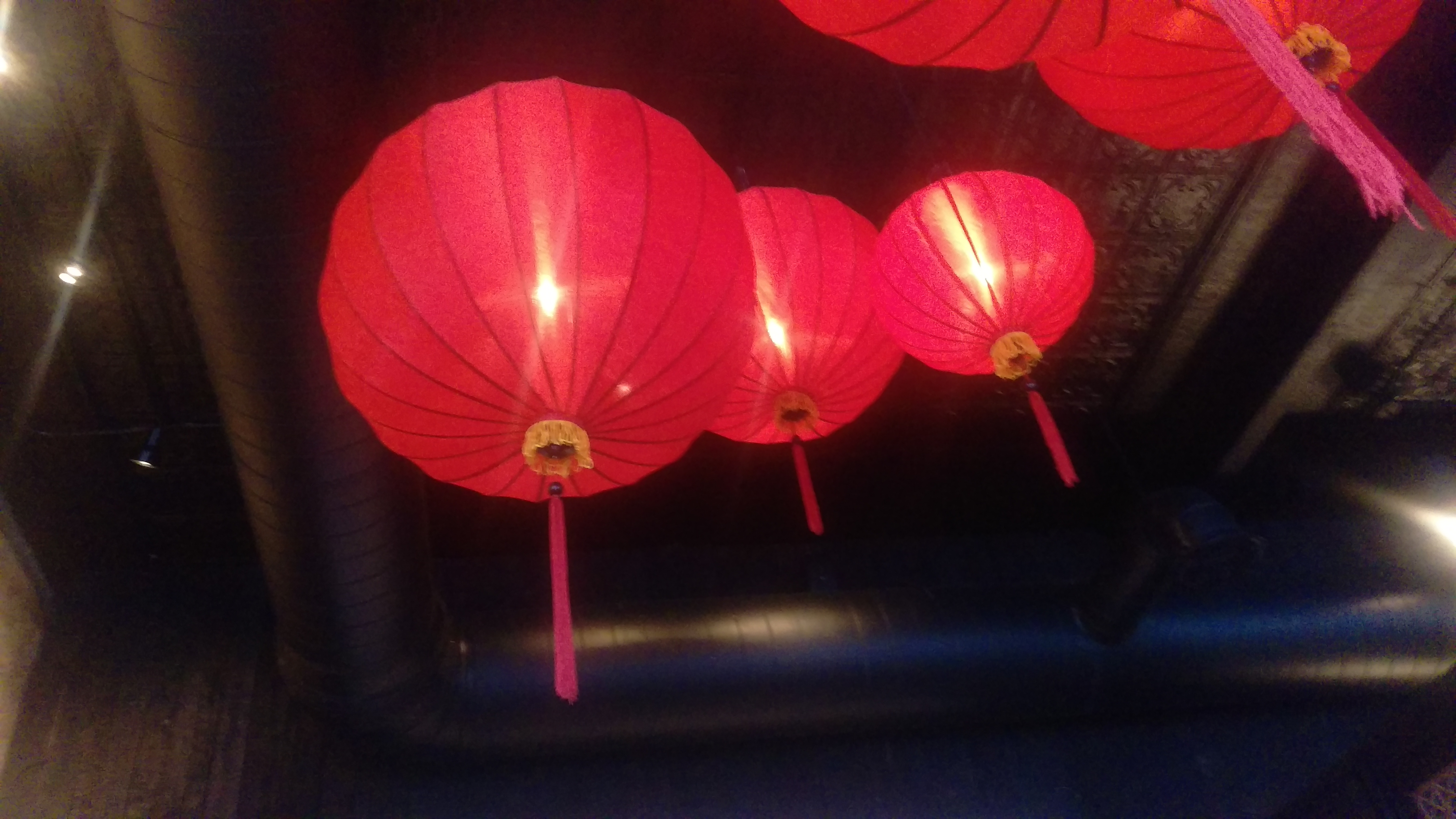 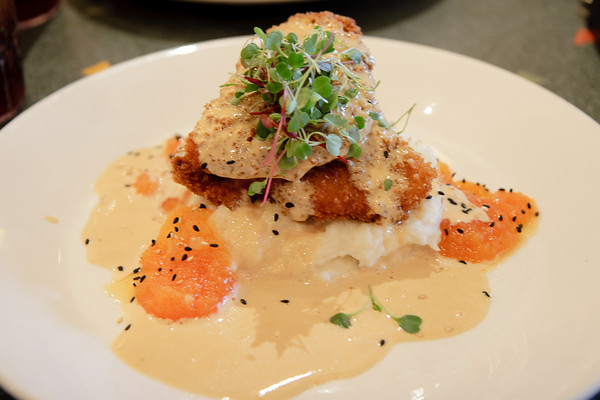