Thursday! We managed to get up a bit earlier than the day before, but still didn’t actually get to the park until noon.

Grabbed “breakfast” at the little shop in the lobby.

First we finally got down to check out the pool. No pictures of the pool area as I don’t have a waterproof case.

These guys crack me up.

Hidden Mickey! Love the other details – like the well-worn English to Spanish dictionary.

The hat is no more here – glad for the shots I got of it.

Off to the Pixar area…

To use a FP for Toy Story Mania!

As I said in the video – we had wanted to hit the Sci-Fi Drive-In but hadn’t made lunch reservations for this park as we wanted to be more flexible. Sci-Fi said they had a 2 hour wait.

50’s Prime Time said much the same – hour and a half at least. I went outside, sat on a bench, and hit the “My Disney Experience” app on my phone. I loaded up the reservation option and refreshed a few times until I found an opening (likely someone had canceled) 20 minutes away.

So instead of 1.5 hours, I walked back in, checked in and waited 15 minutes for my table. SCORE!

We waited in the den watching the latest TV shows.

Once seated, we got to watch more Disney TV as a trade for keeping our elbows off the table.

The cup is adorable too, it has glitter embedded in it! Which, fun fact, I was confused by for a second when I went to rinse the cup in the bathroom after we left. “Why isn’t it rinsing out… oh. Nevermind.”

The rings were very good – nice and crispy. The crab cake was decent, but a little more “filler” than I prefer.

Chris downed his glass of Coke pretty quick. Auntie was non-plussed and brought him THREE more:

When he went through all of those she harrumphed and said she was on to him, and he was cut off.

The TV then taunted his lack of pop!

To give you an idea how a quick shot and having a professional photography background can make all the difference, check out these next two images:

“Not bad – looks tasty enough. I can see what’s on the plate.”

Both shots are mine – both of the same plate of food. The first one I looked at and said “oh, you can do better than that, the chicken is too hot to eat right this second anyway”

For dessert I went with the 50s Boston Cream Parfait – Layers of Chocolate Fudge, Vanilla Ice Cream, Pound Cake, and topped with Whipped Cream and a Fresh Strawberry.

A sugar monstrosity only to rival my Kona Kone from our last trip.

Don’t be fooled – that is the face of concentration. Dessert is serious business.

“Aunt Janice” – she absolutely MADE our experience. The perfect blend of service and attitude I actually left happy when I had said previously (in 2011) I wouldn’t come back here. The food was better for me this time, and the interaction bumped it up considerably.

On our way out I saw this little guy scurrying over the stucco.

We then started to head around to our next FastPass…

Touring the galaxy on Star Tours!

After that, we decided to check out Indiana Jones Stunt Spectacular.

The extras conspire about their role.

Getting some 1-on-1 acting coaching.

*dramatic and elegant fall to the ground*

It’s great to get the actors – but let’s not forget we’re here to see the behind the scenes:

How to fall off a ladder without falling off a ladder – just one of many crazy and specific skill sets stunt-people must learn!

AND… SCENE! Okay, someone put out the Jeep!

So glad we stopped to watch. There was a decent crowd, which was good to see, but it wasn’t FILLED sadly. It’s a shame to think that someone will have the impression that “everything” is CGI now and we don’t need this show anymore. Considering the overhaul currently taking place.

Doctor Who fans – you’re feeling the creepy on this yes?

Never tired of looking at the details here.

I’m pretty sure I read a horror story once about a menacing furnace – and I think this was it.

When we were done falling down an elevator shaft, the sun was setting and I got some lovely twilight* pics.

*OMG pun was not intended…

We made our way out of the park then, as it was time for dinner and dancing.

Well, some folks were dancing at least.

We’re at one of my top 5 favorites: Raglan Road.

Pate is always an option for me, love chicken liver. This was a very nice version with the compote playing off of the deep savory flavors of the meat.

Chris enjoyed his shrimp very much, though a whole plate would be a bit too much heat for me.

I am terribly fond of Shirley Temple’s, and if I’m at a place with mixed drinks this is my go-to.

We watched some solo dancing:

I caught this great shadow – especially since our last ride was the Tower of Terror.

For our entree we both opted for the same:

Sod the Stew – It’s beef stew infused with a hint of Guinness. The ould sod personified.

A side of Au Gratin Potatoes – these things were still sizzling. Really good!

This stew. I could write love letters to it – or the chef. It is so so good. Don’t let that mini pot fool you too, there is a good serving of stew hiding in there!

I am now crossing my fingers it’s still here the next time I visit because it was delicious.

Chris happily stuck with the tried and true.
Ger’s Bread & Butter Pudding – Like no other you have ever tried. Believe us.

With that, I bid you good night! 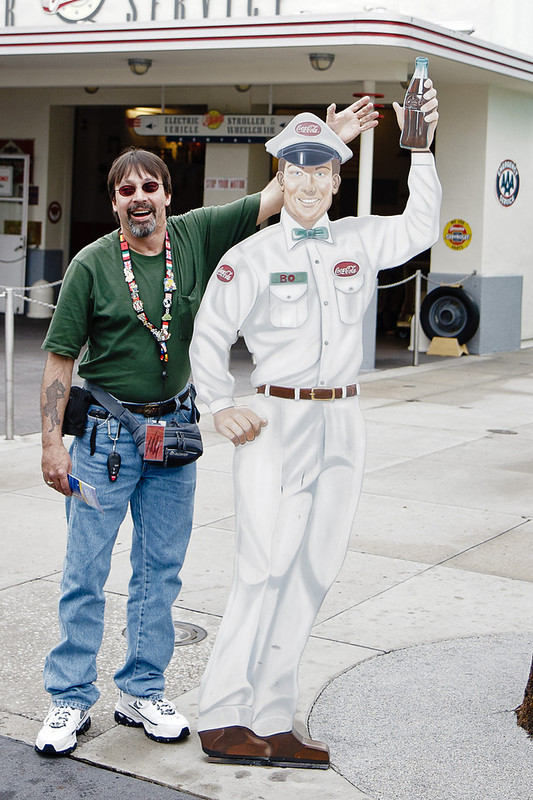 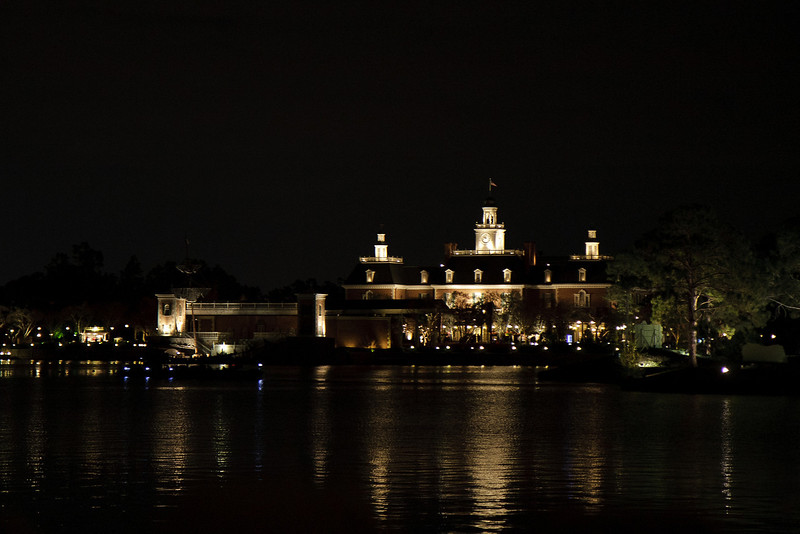